It is true what they say, dogs really are man’s best friend, and despite varying opinions this includes Staffies. I hate to admit it and give up the “tough” reputation of my “status” dog, but my Staffordshire Bull Terrier is actually a big softy.

Obviously I understand the concern of the people who cross the road to avoid us. Or when dogs come up in conversation and the more often than not response to me having a Staffie is a look of shock along with “Oh, bit dangerous aren’t they…” Yes. You are of course right, there is a very high possibility you could be licked to death and who would want to come to such a slobbery end? Staffies have been in my family for generations; with my brother and I personally growing up with one from very young ages. Perhaps surprisingly to some Staffies are one of few dogs described as ‘Nanny’ dogs, meaning they are particularly good with children. My dog shows overwhelming love and affection; when you are having a down day and all you want to do is cry she will make you smile. She will (literally) wee with excitement when someone comes round and there is nothing she enjoys more than snuggling up for a cuddle.

Dogs become part of the family and you can’t begin to imagine the pain of losing one unless you have experienced it. After we lost my first dog Ruby, who was the polar opposite to every negative there is of her breed, and the time came to get another one, it was never discussed because there was no doubt in any of our minds that it wouldn’t be a Staffie. You can never replace a dog, but with her quirky personality; including a love of diving under the water with only her curly tail remaining above, much to the amusement of passers-by, Keira fast became the newest member of our family.  Take a look at her deep river diving here .

However, sometimes man’s best friend is being treated as man’s worst enemy. It is extremely frustrating to see how Staffies are mis-represented which, along with ignorance and a lack of knowledge, results in many people having a terrible misconception of them. This is primarily through the media who portray them as vicious and aggressive, often if a breed of dog is un-known referring to it as a ‘staffie-type’.  As I scrolled through the thousands of pictures I have of Keira on my phone (trust me you are lucky I only chose a few), it is clear to see they are far from the snarling image of dog bearing its teeth that often looks back at us via the media. Obviously if one of my photos was used it wouldn’t back-up the story of these hounds from hell.

Secondly, more often than not it is the wrong end of the lead that gets the blame. The truth is there is no such thing as a bad dog, but bad owners. Like a human, dogs are not born bad, but ultimately it is the environment within which they are brought up that will determine their personalities. Brought up in a loving home full of care and attention, long walks and spoilt rotten my dog would not harm a fly. However, with a different owner this could have been a completely different story. It is a sad fact that some people do get them as status dogs; treating them badly and training them to fight. Cooped up inside without regular exercise resulting in energy that needs burning, ignored and mistreated it would not be surprising if the animal were to snap. Imagine if this was happening to you, it would be enough to make someone crazy.

Staffordshire Bull Terriers are intelligent, mine is of course the Einstein of dogs, appearing to understand every word I say. Until those words are “It is time to go home.” at the end of her walk and then she has no idea who I am, let alone what I am saying. They are full of love and trust for humans, as well as being both powerful, extremely loyal and eager to please their owners. This, when coupled with the wrong owner, is being used to their disadvantage, resulting in the reason behind their bad name. Any dog could have moments of aggression but this along with their strength is when it can lead to injury; small dogs could be just as aggressive but don’t have the power to cause any damage.

To me it is beyond ridiculous that some people want them on the dangerous dogs list, which has partly come about from their physical similarities to the banned breed Pitbulls.They have been given the stigma of dangerous fighting dogs, but in reality they are ideal family pet. They couldn’t love more or try harder to please, thriving on human companionship. Of course I am biased, but the The Kennel Club backs up my claim with this statement ‘with the human race, he is kindness itself, and his genuine love of children is well known.’

Staffies have suffered greatly at hands of irresponsible owners who use them as merely a ‘macho fashion accessory’ and the hostile press; both playing huge roles in creating a negative stereotype. It is not us that needs protecting from the dogs, but the dogs that need protection from the people who are treating t 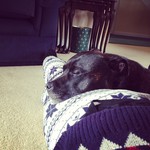 hem in this way.

However, recently Staffies have begun to be shown more for the wonderful breed they really are. Paul O’Grady, along with hosting ‘For the Love of Dogs’, has become a patron of a Staffordshire Bull Terrier Club and as he so rightly said ‘A bad owner could turn a Chihuahua into an evil dog’. Getting this insight into Battersea Dogs Home shows just how many Staffies end up there. Puppies are extremely energetic and excitable, perhaps too much so for some and due to their negative image they can often be hard to home when they are dumped. Honestly if I could give every single one of them a home I would, but through the programme showing Staffies how they truly are perhaps people will begin to see them in a good light. Further to this is the Battersea campaign ‘Staffies: They’re Softer Than You Think’, which has been set up to help people understand the true soft nature of Staffies and encourage potential dog owners to give them a chance.

So why not give Staffies a chance? They really are softer than you think!